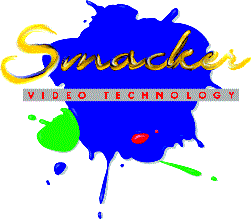 This page is about adding new cutscenes to the games. The cutscenes are either videos that play at 2D events or fullscreen videos like intro, outro and such.

Smacker Video is used by the engine to display video files, the video files should be encoded properly before they can be played in-game with Smacker tool which is a part of RAD Video Tools today. The process is slightly easier if you want to make new cutscenes only for patched version (will not be compatible with base GOG version)

Prior to doing anything you will need:

It may be not very easy to find the old versions of RadVideoTools today. However some people do keep these things on FTP servers.

As you may have noticed 3.1g was released a bit earlier than the ones used to encode videos for M&MVI, but that's okay.

One of the supported video formats is uncompressed AVI. To convert video to it FFMpeg can be used. The following command will output the proper file:

Once installed run SMACKERW.exe and you will be brought to the main menu of the tool. 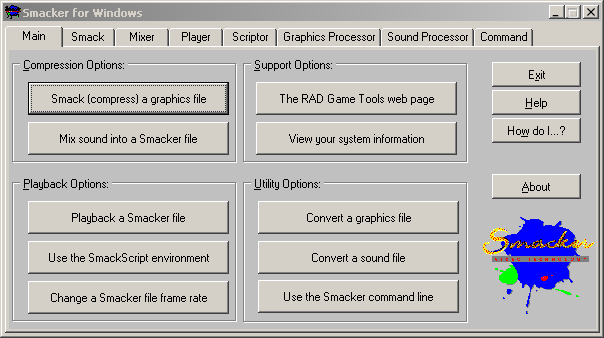 The main menu of Smacker Tool

Using "Smack" tab encode the video, make sure to tick the checkbox at the audio tab if you want to process audio and video at the same time, set the output sound quality to 8 bit as well.

If you've got the audio and video separately, encode the video with "Smack" tab first, then use the "Mixer" tab to combine the audio (8 bit .WAV) and video (.SMK). There is a built-in player which makes it easy to check if the encoded video looks correctly.

After that you will get a new .SMK file which you can add to the game with MMArchive.

The patched version will not crash if the video is not encoded by the matching version, the limitations are not clear yet. So to encode a new cutscene for the patched version of the game you can just grab the latest version of RAD Video Tools. The encoding process and requirements are the same.

Some info about the original files[edit | edit source]